Comments From Our Hunters

Our reputation is built on years of providing the best experience in trophy whitetail hunting. Accompanied by our dedication to 100% success.

Rusty was such a good guide and I was honored to be able to spend time with him. He was really helpful and you have an awesome friend with him, and I hope I do also… I can not ever begin to thank you for the hunt you gave me… I will never forget your kindness or the hunt of a lifetime.

I would like to thank you for the awesome time I had last weekend at Sombrerito Ranch! It was a hunt that I will never forget. From the time I arrived at your ranch I felt like family, and that means everything to me.

Having had the good fortune of hunting a lot of good ranches throughout the great state of Texas. I can honestly say the Sombrerito Ranch offers the very finest of Texas hunting experience.

The Sombrerito Ranch truly lives up to its legendary status. A finer hunt simply cannot be found in Texas….

It was a great privilege to hunt at your ranch. I could not have asked for a better guide, teacher, ranch, selection of deer or accommodations. Everything was, as my kids say “awesome”. You have created a hunter’s paradise I feel blessed to have experienced.

What a magnificent hunt you put on for us last week-end! The beautiful weather was equal to the professional way every phase of the weekend was handled. We are all looking forward to next year.

I would like to thank you for your hospitality and for providing such a wonderful, relaxing atmosphere for our hunting weekend. As usual, your facilities were “fit for a king”.

Thank you again for the great weekend. The wonderful scenery, wildlife, meals, accommodations and camaraderie with all the guys will certainly be talked about around here for a long time.

This is what dreams are made of. This was the best trip of my life. You helped to make memories that will last my life time.

Just wanted to say one more time how much I enjoyed myself on the hunting trip. I can honestly say I have never had so much fun on a hunting trip in my life.

Many thanks for allowing me to bring my son, Chris, to the Sombrerito. It was a very fine experience for him. I was very proud that on his first hunt he shot his first deer at your ranch.

My hunter was originally from Ohio, and lives in Wyoming. Has been a keen deer hunter all his life, but had never seen, or imagined, as many fine whitetail bucks as we saw in just one morning!” In Memory of Finn Aagaard, Professional Hunter.

Your ranch is absolutely unreal. Your genuine love of that land can only be appreciated by someone who shares that depth of affection for the natural world.

Again, my gratitude to you and your staff for an incredible experience, and memories that will last a lifetime.

Sombrerito Ranch is the largest producer of Muy Grande Contest Winners in the 35 year history of our contest.

Thanks for the once in a lifetime opportunity for my son, Troy, and I on the Sombrerito. It was truly the finest deer hunting trip I have ever been on.

Over the years, I have had a chance to hunt and fish in some pretty outstanding places. Your Sombrerito Ranch definitely has the number one place in my book for deer hunting.

I had one of the best times of my life hunting your ranch and appreciate the opportunity to see and experience all that I did. The quality of your people and the hospitality are unforgettable.

I wanted to again express my sincere appreciation for going and hunting on your ranch in South Texas. I have never seen anything like it in my life!

We were all very pleased with the bucks that we collected, and our memories of the ranch, and the hunt will last a lifetime.

Thank you very much for your kind hospitality this past weekend. It felt more like we were staying with friends than any kind of business arrangement.

What a great couple of days. The Sombrerito is the nicest and best maintained South Texas ranch I have ever seen. The deer were great and the hospitality even better.

Just a short note to express my appreciation for such a wonderful hunting experience. You have a magnificent ranch…I don’t recall any setting more attractive.

The habitat and the abundance and quality of game were remarkable. However, the most impressive thing about the weekend was the warm hospitality that you and your staff extended to all of us.

Thanks again for a great hunting experience. Your ranch is plainly and simply a hunters paradise. While there are many places to go hunting, there are very few if any as good as the Sombrerito.

You have a slice of heaven in South Texas and I thoroughly appreciated the opportunity in sharing it.

I really appreciate the quality of your operation. The deer hunt was the highlight of my hunting season and fellowship just made the experience more memorable.

I had the best time in my life hunting on your ranch. My grandpa and I are thinking about taking another trip down to Texas to hunt with you again.

I am sure I’ve hunted most of the well known & scores of the lesser known ranches in Texas & never have I seen a more beautiful ranch.

It was the hunt of a lifetime and I am quite proud of my trophy.

I would like to thank you and your staff for a very enjoyable visit to your ranch and Game Management Preserve! It is astounding to see a well managed hunting program, and to realize how much effort and resources that go into its success.

I have never enjoyed a hunt more than hunting on the Sombrerito Ranch with you and your excellent guides.

At the weighing shed the buck weighed in at 265 lbs. full body and 230 lbs field dressed, the rack was right on as he scored 170 5/8 B&C. Bob and Mr. Carter pulled up and Bob had a tremendous buck, 41 inches of mass and a gross B&C of 183 1/8. As we all stood there looking over the two tremendous deer, Mr. Carter’s expression was one of great satisfaction. The deer were a testament to outstanding deer management and years of allowing full maturity. I feel very blessed to have been on this hunt. The entire event still feels like a dream as I re-live it over and over in my mind. What a great experience, thanks to Bill Carter, The Sombrerito Ranch, and my guide, Jerry Tkac.

The Sombrerito Ranch sprawls across 11,000 acres of brush near the modern city of Laredo, TX. In this neck of the woods, big whitetails have long been known by their Spanish nickname-Muy Grande. Thanks to huge ranches and nutritious native forage, Webb County, Tx., has long been recognized as one of North America’s whitetail hotspots. For more than 20 years, the Sombrerito Ranch has intensively managed for the biggest possible bucks. That means pushing the envelope on what is considered a “mature” buck. Of ranches with active hunting programs, the Sombrerito has one of the oldest buck herds in Texas. Large numbers of mature bucks make for exciting days in the field.

I had to write to tell you what a tremendous thrill I had last week at the Sombrerito Ranch. I have never seen such a beautiful lay out. Your ranch is superb and worth anybody’s time if they just get a chance to view it. The guesthouse is a thing of beauty which I could not help but admire every time I looked around. Your associates seemed made-to-order for what you are doing with this ranch. I have never known anyone as knowledgeable about our native Texas deer as you and really enjoyed hearing you discuss the many things necessary to build up a top deer herd.

Articles From Our Guests 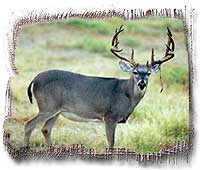 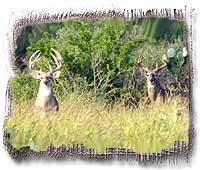 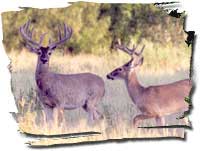 Sombrerito Magic is real. The Sombrerito Ranch has a feel and a look that are the essence of the Brush Country of South Texas. The land glows with rugged vitality, much the same as it must have appeared when hunters with flint and stone camped on the ridges and stalked in the draws. Even non-hunters are inspired by the pristine habitat and flourishing wildlife within the 11,000-acre high- enced Webb County ranch.

But for the serious whitetail hunter, Sombrerito is a magazine cover that comes to life each cool, crisp morning during deer season. Hunting for big, mature South Texas bucks does not get any better, and I base that statement on having covered Texas hunting for more than 30 years as a full-time outdoor writer for the Houston Chronicle.

Sombrerito Magic is not an accident. It is the result of quality habitat and 25 years of game management. Bill Carter bought the ranch during the late 1970s; after inspecting numerous pieces of property, he chose it because of the natural beauty of the rolling terrain and an incredible diversity of high-protein vegetation. Approximately 30 types of native plants suitable for antler-growing, body-building forage thrive on the ranch.

Carter, an early student of deer management, provided the supercharger of abundant water and supplemental protein. From the earliest, he was committed to managing for wildlife. “Cow” might not be a four-letter word on the working ranch, but the natural balance always has taken precedence over livestock.

And, most important, Carter was one of the first South Texas ranchers to understand the importance of allowing bucks to mature into true trophy potential; in fact, he helped determine that the prime antler-growing ages among healthy South Texas bucks are considerably older than most experts thought.

On Sombrerito, the 4 1/2 or 5 1/2 year-old buck regarded as a mature animal in many regions of the country is nothing more than a promising up-and-comer. Mature Sombrerito trophies typically are aged between 7 1/2 and 9 1/2 years. Does this make a difference?

You need only to scan the results of the various big-buck contests in South Texas, and the qualifiers in the Texas Big Game Awards program, to see the rewards of Carter’s concepts and commitments as they apply each year to the fabulous dirt of Sombrerito.

And this is fair and honest hunting. It in no way represents a “canned hunt”. The newcomer has no concept of how totally and completely 11,000 acres of thorn brush can hide a big buck that “goes underground.”

But Sombrerito Magic is more than Boone & Crockett scores. It is the feeling over the dawning sendero and around the glowing fire ring that you are part of a true South Texas hunting experience.