In addition to Sombrerito Ranch, Carter’s Country has been delivering the finest hunting equipment throughout the Houston area since 1961.

A Brief History of Carter’s Country

Bill Carter was born in a small North Carolina town in 1934, and his wife Ellen was born in New York City. Bill’s love of firearms began at age eleven when he purchased his first gun, a used Winchester 22 pump, with paper route money. His love for guns and hunting continued to grow from there! A veteran of the North Carolina National Guard and the Marine Corps reconnaissance unit, he was sent to Korea about the time of the cease-fire and end to the conflict. He liked the marines and considered a career there. But he couldn’t become an officer because of his lack of education. So he left the Marine Corps in 1956 to get a couple years of college, but he never went back. He spent time as a seaman on merchant ships. “I found myself coming to Houston a lot.” The magic was there “because you could always get a job in Houston,” Carter said. “I never say that word that I don’t still get that special feeling.” Bill met his future wife in New Jersey, the other end of his shipping route. “I finally talked her into marrying me, and said, “Hey, let’s go to Houston.” Carter got a job as an ironworker, and he made more money than he had ever made before. Ellen Carter worked at Hermann Hospital’s emergency room. When they got settled, he started doing work for his fellow ironworkers – his company based out of his garage, was called Custom Guns. He produced bolt-action rifles using barreled actions and custom stocks.

He tested weapons at Weaver Rifle & Gun Club on Aldine-Westfield about a mile north of FM1960, which was a desolate 2-lane road at that time, arriving at daylight on most weekends. Finally, the owner offered to sell him the place since Carter seemed to be there all the time anyway. The seed was planted…. He wanted $15,000 down for the gun club and the 15 acres of land he insisted on selling with it. “We scraped and scraped, and got the $15,000, with about 75 cents to spare, and closed the deal,” Carter said. They opened a small retail operation in a 10 by 10-foot metal building. Both kept their day jobs – he as an ironworker and she as a registered nurse. Sales that first-year were very slow, grossing only about $32,000. The gun club slowly became profitable. Bill’s extensive knowledge of guns was appreciated and was becoming more well known in the Houston area. He saw a lot of mistakes and solved them-mismatched rifles and scopes, for example-that people had bought elsewhere. 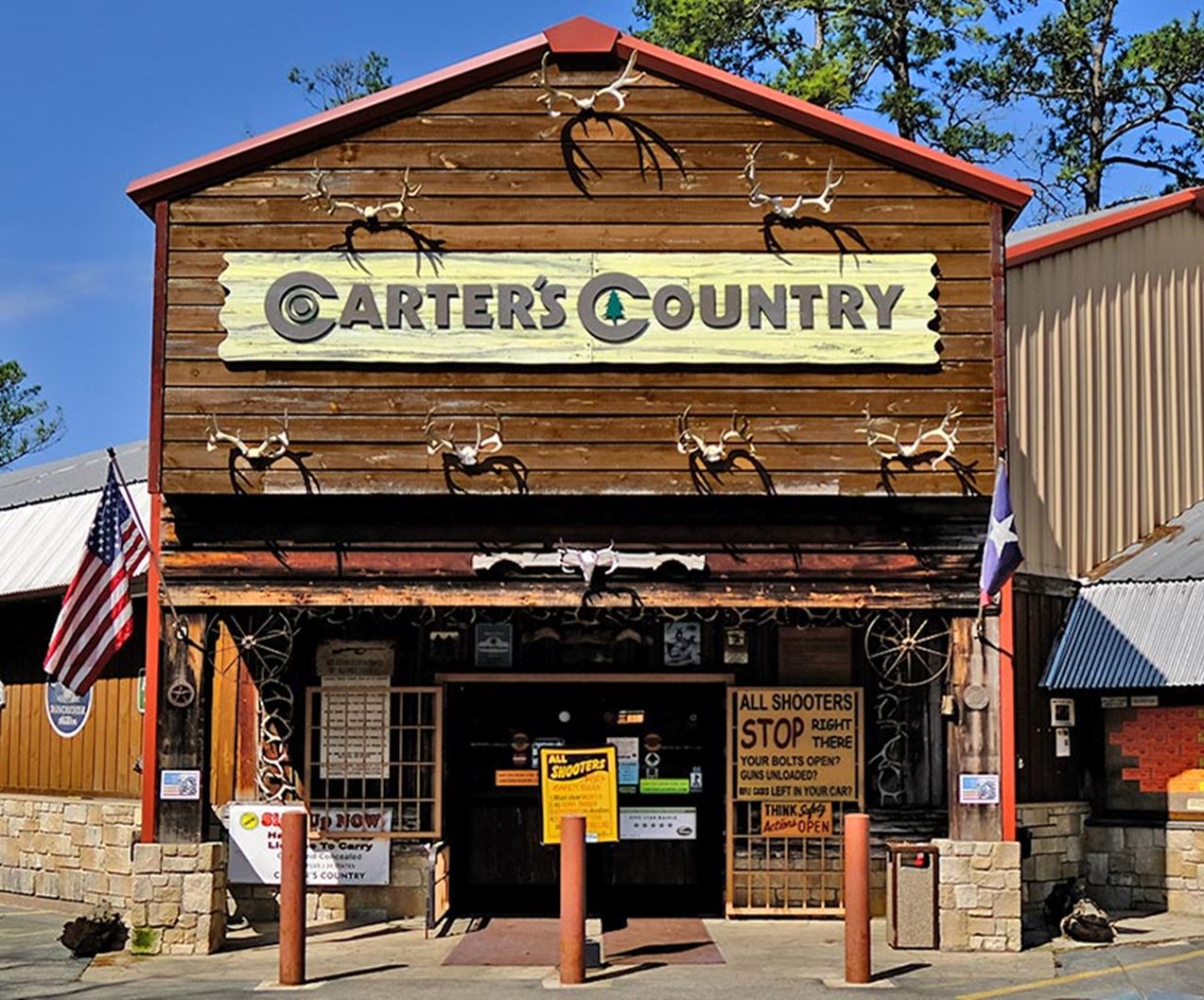 Expanding and Growing the Family Business

By 1969, the business had grown to the point where they needed to move to a larger site. At this time, Ellen was drafted from the nursing profession to play a much more active role in the business, skillfully managing the finances over the years, while Bill continued to grow his customer base with his expert knowledge, great service and total dedication to guns, ammo and hunting equipment. The Carter “kids” are Billy and Lori and have grown up in the business. Billy is now managing the Spring Location and has many shooting accomplishments, including a world record 2-mile shot! Lori is running the back office and helping get the website and online store off the ground. Together, the Carter family has expanded Carter’s Country Outdoor Stores sales areas to 4 beautiful retail stores with a total of 50,000 square feet, a warehouse and distribution center, a full-service gun repair shop, a public shooting facility (shooting range Houston) adjacent to the North Houston store, and commercial hunting and guiding operations in three main hunting areas of Texas and Colorado.

We Serve the Entire Houston Area